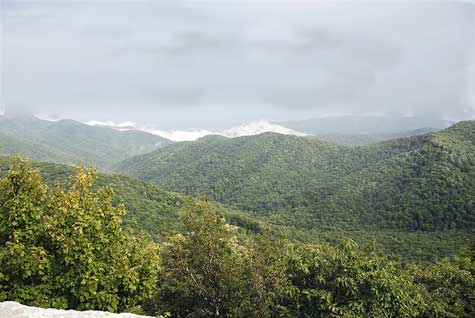 Photo special to the Sun The final acreage in the Rocky Fork tract to await full government ownership and management has taken one of the final steps to being secured. The U.S. Forest Service retained $5 million through the Federal Land and Conservation Program for purchase of the remaining land.

Funding appears to finally be in place for the purchase of the remaining portion of Rocky Fork, an almost-10,000-acre tract of undeveloped wilderness.

The U.S. Forest Service (USFS) retained $5 million through the Federal Land and Conservation Program for the purchase of the remaining acres of land in the 2012 federal budget, he said.

The Conservation Fund also obtained an additional $250,000 in grant funding from the Acres for America program that will benefit the conveyance of this final section to the USFS.

“Obviously, it’s significant and very exciting to be this close to the finish line,” Knoll said.

Combined, these funds will allow the project to “cross the finish line” once all the ‘T’s are crossed on the federal funds and all grant requirements are fulfilled,” he said.

“That process has just begun,” Knoll added. “The optimistic part of me hopes that we can get all that taken care of sometime this spring.”

Acres for America, a partnership between Wal-Mart Inc. and the National Fish and Wildlife Foundation (NFWF), provides funding for such conservation projects annually, according to the NFWF website.

“The goal of the Acres for America program is to offset the footprint of Walmart’s domestic facilities on at least an acre by acre basis through these acquisitions,” according to the website.

The full $500,000 grant, half of which will benefit Rocky Fork, was secured through a collaborative effort by the Blue Ridge Forever coalition of land trusts, Conservation Trust for North Carolina, The Conservation Fund, and the Appalachian Trail Conservancy, with support from Trout Unlimited, Appalachian Mountains Joint Venture and others, according to a recent news release.

“The grant will protect a patchwork of more than 12,000 acres of high priority conservation lands with 36 miles of streams and adjoining hundreds of thousands of acres of public lands,” the release said.

The Cherokee National Forest last purchased a portion of Rocky Fork in September 2011, including 1,429 acres for $6 million, all but 19 acres of which were in Greene County, Knoll said.

He has described the location of the tract as adjacent to the Sampson Wildlife Area, and visible on the right for drivers on State Rt. 107 (the Erwin Highway) as they head toward Erwin from Greeneville.

Approximately two-thirds of the total 10,000 acres is located in Unicoi County, with the remainder in Greene County.

Knoll has been involved in the acquisition process since 2006.

In 2008, the USFS paid $8.4 million for a 2,237-acre tract of Rocky Fork, while The Conservation Fund also purchased the majority of the land from a private landowner for $31.6 million.

Of that amount, $6 million came from a state grant and another $3 million from private sources.

All together, the $40 million purchased 9,624 acres from New Forestry, LLC., Knoll said.

The federal government’s purchases since that time from The Conservation Fund have included:

When the non-profit and governmental organizations first purchased the land, the private landowner retained 100 acres of the mountain-top property.

The Conservation Fund and the USFS are in talks with the landowners to obtain this final small portion, he said.

“It’s our objective to see those 100 acres protected, just like the rest of Rocky Fork,” Knoll said. “Just like any transaction, the devil’s in the details.”

He also noted that the Appalachian Trail Conservancy has been working to design a relocation of a section of the trail that he said has prompted some environmental concerns.

Approximately one mile of the trail crosses the land.

There are also about 16 miles of native-brook trout streams, which are among only a handful of pristine brook trout habitats remaining in the Eastern U.S., according to rankings by fisheries biologists.

“I’m convinced and others are convinced this is just a tremendous resource with lots of potential,” he said.

While the public continues to use the land for fishing, hunting, wildlife viewing and hiking, The Conservation Fund hopes to see the State of Tennessee turn its portion, the bulk of the remaining 1,965 acres known as the “entrance to Rocky Fork,” into a state park featuring recreational facilities, Knoll said.